One and two hour cruises on Loch Lomond departing from the centre of Balloch Village. Open 7 days a week all year round. Book online at www.sweeneyscruises.com

Loch Lomond. Described by some as the Queen of Scottish Lochs due to its outstanding natural beauty, not just along its famously bonnie banks, but also on and around its scattering of islands and the many ruins, stately homes and wildlife that occupy them.

So who better to reveal to you this rich mix of history, legend and romance than Sweeney’s Cruises – a family business that has come to know every one of Loch Lomond’s 23 miles, having operated boats on the Loch since the 1880s.

In those early days, the business centred on steam launches and rowing boats. Today, under the expert management of John Sweeney – the fourth generation of the Sweeney family to work on Loch Lomond – wife Catherine and their sons, Sweeney’s Cruises is proud to operate the most luxurious fleet of passenger boats in Scotland.

A fleet that’s as stylish as it is smooth to sail, whose interiors are as immaculate as they are impeccably designed, and whose service never fails to be anything other than first class. Quite simply, a memorable way to experience a most spectacular setting.

We look forward to welcoming you aboard 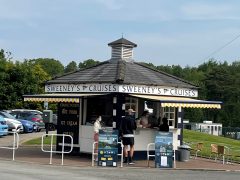